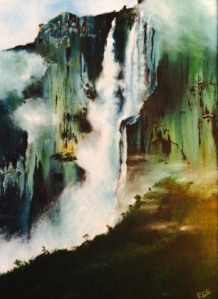 It was an unusually hot day and my body temperature was also rising after a spate of weekend housework that included the bending, lifting and other body movements that produce a shiny coat of perspiration. A well earned break found me sitting in the living room where I could clearly see the painting shown here.* Psychologically the color green is known to produce a feeling of rest and equilibrium and the predominant deep green of the painting was generating exactly that in my tired body. In addition I could almost feel the cool mist from the water as it cascaded down the mountainside. In just a few minutes, I was feeling refreshed.

Recently I read the very personal letter the Apostle Paul wrote to his friend Philemon. He was requesting some “tough stuff” from his friend but before he presented the challenge, he wrote these words: Your love has given me great joy and encouragement because you have refreshed the hearts of God’s people. Paul wasn’t saying that Philemon merely spoke well of God’s people. Nor that he had practiced hospitality. Nor that he was theologically correct. That word refresh means more than the “recovery” I felt while gazing at the painting. More than a glass of lemonade on a hot day. Or an afternoon nap. In its essence it means to calm or soothe. Exactly what we need when life—and perhaps people—take a toll on our resources.

Jesus used the same word when he said, Come to me, all you who are weary and carrying heavy burdens, and I will refresh you (Matthew 11:28). While such refreshment is freely given by Jesus, we learn from Paul that it is a gift we can also give each other.

I meet regularly with two women who offer this gift. Neither would claim the title mentor, guide or counselor. They are friends. Time flies as I sit with one at the coffee shop, sometimes relating family experiences, or sharing how recent time with Jesus has been uplifting. (Or convicting!) Another friend and I meet weekly for prayer. Our “prayer” frequently consists of conversation with each other and with our Father as we invite Him into the hour. Sometimes we weep for and over God’s people; other times our praise rings loud; often we plead for a new work of God’s Spirit. And I come away from both experiences, with two very different friends, refreshed…calmed, soothed, given rest.

On the other end of the spectrum, I walk away from other conversations that have absolutely no soothing aspect to them. Sometimes I’ve heard strident political harangue. Other times criticism of people, organizations (including the church), media or any number of similar entities cause a dusty cloud in my heart like the one hovering over Charlie Brown’s friend Pig Pen.

In a world where both print and broadcast journalism seem determined to depress and discourage—and even induce fear—NBC Nightly News has a refreshing closing segment entitled “Making a Difference.” Whether the clips are about a small child’s courage, a community’s care or a frisky family pet, the program ends with these moments that refresh. We who call ourselves followers of Jesus could learn something from NBC.

One thought on “Refreshers”