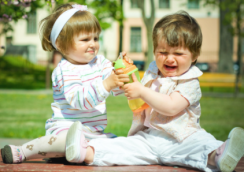 Can you see and hear the frustration, anger, tears, screams as young children tussle over the same toy? Adult conversation momentarily halts as the battle increases until a caregiver wades into the fray to prevent the battle from turning into all out war.

Recently I became aware of an inner tussle with the word MINE front and center. It started—or was fed by—an insurance company’s television commercial of a woman’s “she shed” burning. It’s a comedic ad that’s gone viral but for me was a reminder of a (somewhat) humorous remark I made to my husband as we prepared to return to the U.S. after twenty-plus years of living outside our “birth borders.” During the most recent years, the ministry office was in our home and while it was convenient to figuratively roll out of bed to the desk, more than a few inconveniences existed. During work hours, our “home” was an open book.

So when we mused about the kind of house we wanted/needed in the U.S., along with built-in closets (only wardrobes in Germany), a fireplace (if possible), and maybe even an icemaker in the refrigerator, I reached for the sky and laughingly said, “How about a small shed in the backyard where I can sit for writing, reading, thinking? No doorbell 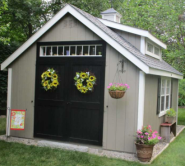 and a lock on the door would be nice!”

We eventually bought a lovely home (with fireplace, closets and icemaker!) where there was at least space to retreat—but no She Shed. Eventually we downsized to a condo which fit our needs, but retreat space became even more limited. Then age, health, and finances required a second downsize. It is a perfect place for our needs and I rejoice that God supplied the space even when the “odds” seemed to thwart our plans. No She Shed. Not even a spare room. No space that is exclusively MINE.

While a “man cave” has gained not only in interest but is often seen as a necessity for men who need a place to unwind, think, “privatize” after the demands of the workplace, similar space for women has only recently been studied. Hence the popularity of that commercial?

The other morning when that inner tussle threatened to distract me from moments dedicated to prayer, I began examining my demand for MINE. Why this niggling thirst for something, some place, that exclusively belongs to me? A place with a lock and without a doorbell! What else, who else do I insist is MINE? And why?

And with those questions I end this session! I welcome your thoughts on the subject (mj.ehle@comcast.net; MINE in the subject line) and promise to return with your observations and more of my own.