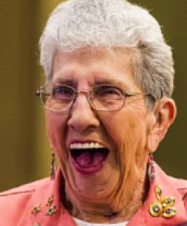 Her laughing face fairly jumps off the front page of this May 30 edition of our city newspaper. At first glance, we might guess she is without a care in the world, obviously celebrating a birthday or other momentous event.

On this Memorial Day she is celebrating, recently honored for her 25,000 hours of volunteering in a local hospital. But all celebrations are tinged with daily pain: before her son could write his first letter home as a pilot in the Vietnam war, his helicopter was shot down in the Mekong Delta.

As tragic as was this event, it was later compounded by the death from cancer of her only other son. Twice widowed, she understandably felt lost. According to the article, “Being around others experiencing joy, fear, hope and sadness—the daily rhythm of a hospital—was the tonic (she) needed. It showed her how much she’d lost, but also something else—the love that remained.” At 98 ½ (“don’t forget the half,” she says), she still works three days each week in the hospital gift shop where employees come for encouragement, new parents buy stuffed animals, grieving families find a touch of hope.

The last reason chefs give for stirring the pot is to “alter the viscosity of a liquid,” i.e., to make a change. This woman’s life was changed by the tragedies of war and disease, and now she seeks to change the lives of others. Her last quote recorded in the article sums it up perfectly: “God didn’t put me on this Earth to just take up space.”