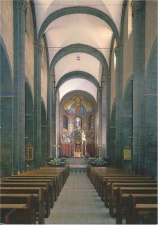 Many years ago I read Dr. Paul Tournier’s book, A Place for You, and was strangely touched by his insight into what it means to finally, and totally, find our “place” in God. One reviewer describes Tournier’s view this way: There is the uncomfortable uncertainty of being between handholds, but ultimately we have to learn to cope with this. The ultimate place, he (Tournier) suggests, is God.

As one who has moved many times in her adult life, I often find it necessary to discover a physical place to settle into the God place. During these first weeks of the new year while cleaning off the nooks and crannies of my desk, I came upon a postcard that immediately invoked memories—sights, sounds, impressions—of such a place.

During our fifteen years in Germany my life was full to the brim most days. Early in those years, I coped with tragedy and questions. Later I was blessed to be part of a group of women who eagerly wanted to learn how to deeply delve into the Bible, discovering not only methods of study, but—more importantly—how that book and its Author could gradually transform our lives. In addition, my husband and I became acquainted at an increasingly deep level with people from countries around the world and this meant lots of social interaction. Also, our office was in our home, so finding a free-of-interruption “place” of my own was nearly impossible.

But since personal, spiritual, mental, emotional sanity was an absolute necessity, I fled to two spaces. During the later years, daily walks along the Rhine River became the time to breathe anew. Sunsets, the chug of river barges, the splash of waves hitting the shore, mother ducks and their playful offspring, all served as moments of renewal.

But it was at the Benedictine Maria Laach Abbey, forty minutes south of Bonn, where I sat to regroup, renew, refill my soul to the greatest degree. If I timed it right, after walking through the Romanesque covered archway, I found a pew in the very back of the church, settling myself just before a door at the right front slid open and black-robed monks entered, shod with footwear I’m sure had six-inch rubber soles that allowed no step to be heard. They silently found their places in the choir rows to the side of the altar.

Snatches of my high school Latin surfaced so I could understand bits and pieces of the beautiful noon time chanted adoration of the Incarnate Christ. As they gave voice to their praise, I could feel peace seeping into my soul. Then, just as soundlessly as they entered, they disappeared through the same door. Some days I sat long after their departure, offering my own inner chants of praise. Other times I walked through the Abbey gardens before again taking my place in B9 traffic toward Bonn.

Today I have no Rhine and no Abbey. When weather permits, I walk into the hills of a nearby convent to settle on a bench where the only sounds are from God-created, feathered birds and the occasional man-created training aircraft from the nearby Air Force Academy. But most days I simply sit quietly at home in my rocking chair, burning candle nearby, looking for—and usually finding—my place in God.