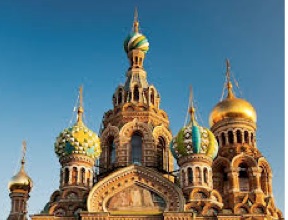 Summer. 1980. U.S. Boycotts Moscow Olympics. And there we were in Leningrad,* Russia. My husband and I had applied for visitor visas because Leningrad is only a six-hour drive from Turku, Finland where we would be attending a conference. When would we ever again be this close to such a beautiful city known for its tapestry of rich history and tragic suffering?

Because our visit would be brief, we hired a “state sponsored” tour guide: lovely, knowledgeable, friendly Natasha. To help share the cost, two acquaintances—who had also attended the conference—sat in the back seat of our Ford Taunus as we drove through the historic streets, Natasha between them pointing out and describing the sites of which she was justifiably proud.

Aware of the political and religious climate in Russia and especially the tentative relationship between Russia and the U.S., we were exceptionally sensitive to the proud people of our host nation, and especially to the many followers of Jesus who bravely lived their faith under difficult conditions. We carried no religious literature (except our personal Bibles), wore no religious symbols, initiated no conversations that could be described as “proselytizing” although we freely answered any questions asked of us.

Our tour was nearly over when my husband turned to our obviously well educated new friend and quietly asked, “Tell me, Natasha, how is Jesus presented in your schools?” Without the slightest trace of defensiveness, her answer was quick and sure: “Oh, he’s a myth.” “How interesting when scholars have proven that the man Jesus lived nearly 2,000 years ago,” was my husband’s gentle response.

Conversation gently proceeded with my husband explaining his understanding of Jesus as the promised Messiah and how belief in Jesus had influenced his own life. Then Stan, seated on one side of Natasha, shared how he had argued against the reality of Jesus through intellectual means until he could no longer deny the proof he found in the Bible, eventually placing his personal faith in Jesus. Then Susan, on Natasha’s left, talked about her empty loneliness while in university, weeping with despair into her pillow each night, and how Jesus became the great Comforter and Redeemer for her.

We were now at the hotel where Natasha would leave us and Bob, glancing into the rear view mirror, observed that not only was she intently listening, but tears were pooling in her eyes. Although we had no Bible or literature to give her, we did have a few copies of the memorial article we had written only a few months earlier when our 18-year-old son died. In it were a few sentences about his own journey with Christ, the basis for his trust in Christ and his commitment to Christ. Natasha gratefully accepted the paper, very sincerely thanking us for the afternoon and for the opportunity to meet us. End of story.

Or is it? We will probably never again meet Natasha. We don’t know if she ever investigated further the Jesus we described. But I am left with these questions:

If she did one day seek out and follow the Savior, in addition to the work of the Holy Spirit, what drew her to him? How did she hear his call? Was it intellectual curiosity? Was it emotional hunger? Was it a desire to refute his claims?

These are questions pertinent to people we meet today and to be further explored in another blog. What draws people to Jesus? Is it by “falling in love with Jesus”? Inexorably drawn to his offer of peace? eternal life? grace? mercy? Do some eventually trust Christ because their intellect cannot deny his claims? Because the resurrection can no longer be denied? What New Testament examples of each/all can we find? On what avenue did Jesus walk when he came to you?